Double top and double bottoms in NYSE Advance Decline line makes for too many possible top dates. I focus on a longest projection targeting mid-August top, unless recent lows gets taken out.
T-Theory has been spot on for few years now, with recent T's overrunning their projected top dates. This is an indication of a very strong, one way bullish market. Spring T of 2018 will show if it remains to be so. 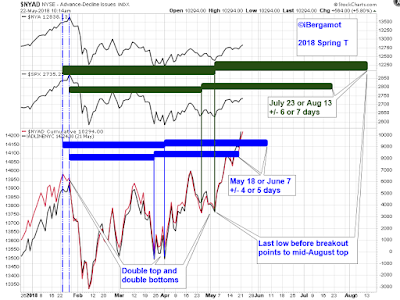 What if that was just a beginning? Next low, the lower low, came on week of July 5, 2016 at 2.1%. The span of left side of the T from highest high to lowest low is 135 weeks, with projection for "Low in Stocks" week of February 4, 2019. Plus / minus 10% margin of error of base range and keep in mind a previous high of interest rates 15 weeks earlier - rout in stocks can last from October 2018 till end of summer of 2019. Difficulty in projecting a very large, multi-year time symmetries is that ripples from price movement gets smeared over extended time-line and lose their predictive powers, making trading on this type of analysis very difficult in real time. I just want to take these measurements before data runs off a left side of free chart. Continue...

Apparent multi-year resistance at 3.2% level opens a variant of a "last low before the breakout".
Note: breakout has not happened yet. We may be in a process of it now, it may happen later or not at all.
The span of left side of the T is 196 weeks from highest high to last low of 2.65% on week of September 5, 2017, projecting a Low in Stocks around week of June 7, 2021. Since my crystal ball is fuzzy at such distances, I say period of softness in stock prices may last from spring of 2021 to summer of 2022.

In other words, bear market in stocks that started on January 29 of this year (2018) will last 4 long years and will bottom in a first half of 2022 somewhere south from here.
FML

... or
stocks rally thru summer 2018, perhaps making a nominal high above January top
then have a traditional crash in September - October, linger into Spring 2019,
double bottom or new panic lows in Summer 2019,
followed by face-ripping rally till the end of 2020,
culminated with mother of all bear markets in 21-22
... or
SNAFU 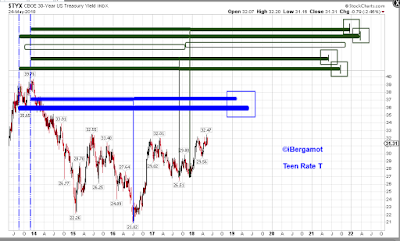 Zooming in into 30-year bond yield, I am tempted by a Rate T in development since the beginning of 2017. Presented below is a double top around 3.2% in December 2016 and March 2017. First measurement pointed to week of March 5, 2018 with actual low in stocks arriving 2 weeks later (within the margin of error). The next projection hits on week of May 29. Beyond that i am not sure. To seriously consider 2 green time symmetries I need to see 3.2% level decisively taken out, but so is a Teen Rate T, with corresponding conclusions. 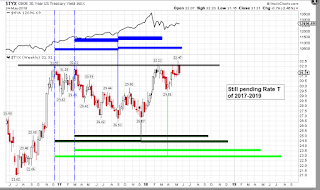 UPDATE 4/9/2019
RATE T of 2017-2019 seems to be completed now.
That last light-green symmetry is no longer valid, because it was based on "last low before breakout" notion.
Breakout at 3.2 yield has failed at the end of 2018.
With lower low in 30year yield at the end of March 2019 - there is a good chance that a new Rate T is underway. Destination unknown. 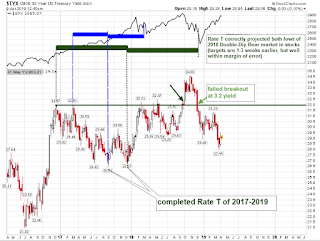 ...............
A Personal Journal of Speculator
Trading full time
Keeping busy the rest of the time


Why iBergamot? See this (link)